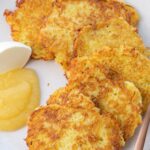 German potato pancakes are true comfort food. Easy and quick to make, crunchy at the edges and soft in the middle. Serve them with applesauce and sour cream for an ultimate treat.

What are German potato pancakes?

German potato pancakes are pancakes made from grated raw potatoes, grated onions, egg, and spices. They are fried in a pan and are super crunchy. They are very popular in Germany, German-speaking countries, and neighboring countries. They are served as a snack or as a side dish.

In German, they are called Kartoffelpuffer, Erdäpfelpuffer (in Austria), or Reibekuchen which means “potato puffs” or “grated pancakes”.

Here’s what you need to make German potato pancakes (Kartoffelpuffer):

Potatoes – The best potatoes for potato pancakes are starchy/mealy potatoes such as Russets and the second best are all-purpose potatoes such as Yukon Gold potatoes. They don’t release much water and make crispy pancakes that are not oily. Russet potatoes are super starchy which helps bind the ingredients and don’t release much water which makes them crispier and causes they don’t absorb so much oil. They make great pancakes.

Do not use waxy or young potatoes as they are very watery. Watery potatoes are the worst kind of potato to use for these pancakes.

Onion – can be omitted but I really recommend adding it!

Egg – binds the ingredients but you can omit it if you want to make your potato pancakes vegan or if you just run out of eggs. Just add some potato starch to the pancake batter.

Salt and pepper – don’t skim on the pepper!

Frying oil – must have a high smoke point, which means it can be heated to a high temperature. Any high smoke point vegetable oil will do. Alternatively, use lard or clarified butter. Do not use regular butter as it’s not suitable for frying and it will burn too quickly. Olive oil also can be used – it would be better to use olive oil that is suitable for frying, not extra virgin olive oil which is more expensive and perfect for salads.

What you could also add: I’m giving you a basic/classic recipe for potato pancakes but you can modify it freely or add other seasonings to make them more interesting. You can season your pancakes with: garlic powder, paprika, onion powder, Italian seasoning, fresh chopped parsley or dill, or even Parmesan cheese.

How to grate potatoes for potato pancakes?

You can grate the potatoes by hand (this is, unfortunately, the best option) or with a food processor. I don’t recommend pureeing the potatoes in a food processor/blender so that they almost resemble a mash, although some people prepare them this way. Try out a couple of options to see what you like best!

How to make German potato pancakes step by step

Squeeze out as much water as you can from the potatoes. You can do that by hand or wrap the potatoes in a clean kitchen cloth and squeeze them out. Gather the liquid in a bowl and don’t discard it! Let it stand for 5-10 minutes then carefully discard the water at the top. You will see in your bowl the potato starch (a thick white paste) that will gather at the bottom. You will add that to your grated potatoes.

How to cook potato pancakes:

Pour a couple of tablespoons of oil into a frying pan over medium or medium-high heat (it depends on how powerful your stovetop is). When your pan is hot enough, scoop about 1 heaped tablespoon of batter per pancake, flatten each pancake into rounds about 1/4 – 1/3 inch (1/2 – 3/4 cm) thick. Cook until golden then flip over and cook on the other side until golden. Don’t cook them over too high heat or they will be browned on the outside but raw in the middle. Transfer to a plate lined with paper towels to drain the excess fat (if you want your pancakes more crispy, drain them on a wire rack).

How much oil do you need to cook potato pancakes? The amount of oil will depend on how big the pan is. There should be enough oil to cover a minimum of 1/3 of the thickness of the pancakes, and better would be at least 1/2 of their thickness (yes, unfortunately, more oil = more delicious pancakes).

How to keep potato pancakes from falling apart

How to serve potato pancakes

I have for you some storage and make-ahead tips, but please bear in mind that the best-tasting potato pancakes are made fresh, just after preparing the batter and everything else is second-best.

Can you leave the potato pancakes batter and fry them the next day?

Yes. Cover the freshly prepared batter tightly with plastic foil (the foil should touch the surface of the batter) and put in the fridge for up to 24h. The batter will be very watery on the next day so you need to drain it again very thoroughly (squeeze out the liquid as much as you can) and lightly season again with salt and pepper. The batter will also darken, but you won’t see it after frying the pancakes as they will be just golden from frying. These pancakes will be more oily in comparison to freshly prepared pancakes.

How to store cooked potato pancakes?

Wrap them tightly in plastic foil or put them in a tightly-closed container, and store them in the fridge for up to 48 hours.

How to reheat cooked potato pancakes?

You can either reheat them in an oven preheated to 375°F (190°C) until warm or put them on a dry or just lightly-oiled non-stick pan and cook until warm and crispy (the second option is better but more labor-intensive if you have more pancakes to reheat).

Freezing: The pancakes and the batter can not be frozen. This results in very mushy and tasteless pancakes.

German potato pancakes are true comfort food. Easy and quick to make, crunchy at the edges and soft in the middle. Serve them with applesauce and sour cream for an ultimate treat.
Pin This Recipe! SAVE THIS RECIPESaved!

for the potato pancakes:

Course Side Dish
Cuisine austrian, German
Diet Vegetarian
Tried this Recipe? Rate the Recipe and tell us what you think in the Comments! 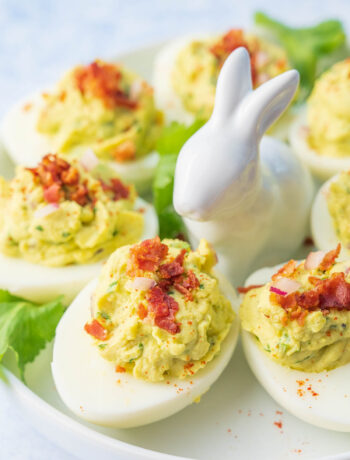 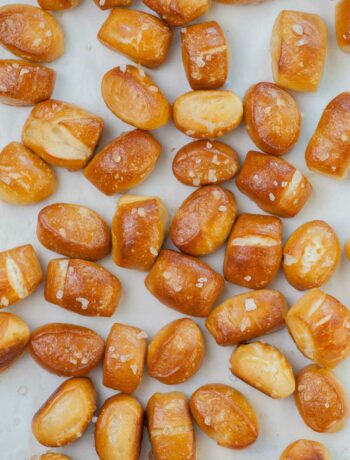 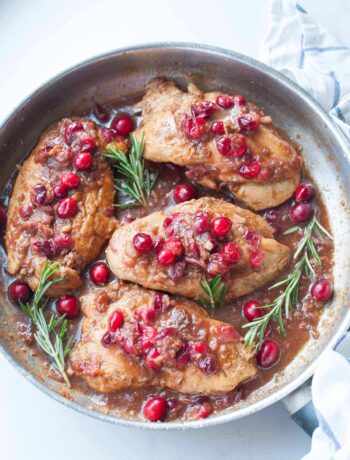