Churros with chocolate sauce are a very popular snack in Spain, Portugal and South- and Middle America. These deep-fried pastries are sometimes referred to as Spanish doughnuts. Churros are very crispy on the outside and soft on the inside, sprinkled with cinnamon sugar, smell wonderfully and are very addictive!

Churros are very easy to make, all you need to do is throw all the ingredients except the flour into a pot, and when they come to the boil, add the flour, mix in and it’s ready!

There are many types of churros, for example in Spain – thick and plain-shaped sticks in the north, thin and star-shaped ones in the south, often served with a hot chocolate. In Mexico, they are often stuffed with dulce de leche, in Cuba with sweet and exotic guava filling and in Uruguay, you can find a melted cheese filling. In many countries, there are special stands on the streets, where churros are sold – called Churreria.

It is not known, where exactly the churros came from, but there are two theories: the first assumes that they came from Spain and were often cooked by nomadic Spanish shepherds, as a substitute for fresh bread because the dough was easy to make and fry. The second theory, considered as the more likely one, says that Portuguese sailors brought the idea back from China, as the Chinese people ate salty deep-fried dough sticks called youtiao for their breakfast. The Portuguese and the Spaniards, along with their conquests, spread the churros all over Central and South America.

CHURROS DOUGH RECIPE – WITH EGGS OR WITHOUT EGGS?

You can find two types of recipes for churros – for a dough with eggs and without eggs. I searched through the recipes on some Spanish blogs and most of them were without the eggs. I tried both versions and the dough without the eggs is my favorite. Churros with eggs are more fluffy and light, but definitely less crunchy.

Crispy churros coated with cinnamon sugar and dipped in chocolate sauce
SAVE THIS RECIPESaved! 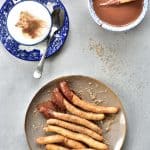 – It’s important that the oil is well heated, it can not be too cold because the churros will absorb the fat and will not be tasty, the oil can not also be too hot because the churros will brown too quickly from the outside and be raw in the middle. – You shouldn‘t fry too many churros at the same time because it will cause the oil temperature to drop too much and the churros will soak up the fat. – The dough comes out quite thick, so it’s good to have a heavy-duty piping bag, I do not recommend using a plastic bag with a cut-off corner, because it may split open and the mixture will burst out into the hot oil.
Course Dessert
Cuisine Mexican, Spanish
Tried this Recipe? Rate the Recipe and tell us what you think in the Comments! 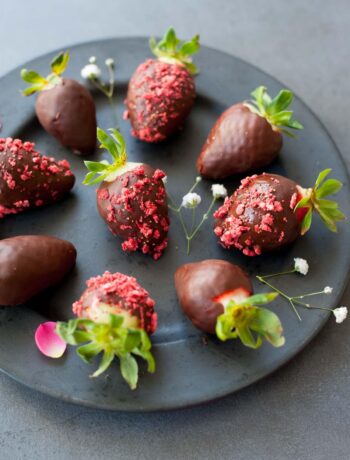 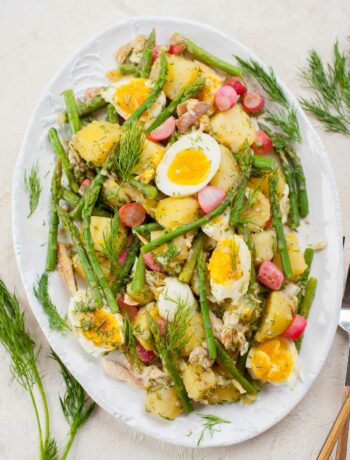 Potato and asparagus salad with eggs and smoked trout